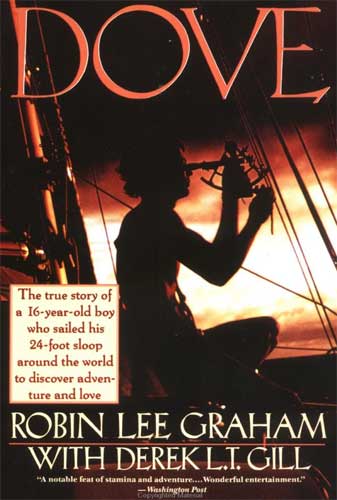 Robin Lee Graham (born March 5, 1949) is an American sailor. He set out to sail around the world alone as a teenager in the summer of 1965. National Geographic Magazine ( Oct. ’68, April ’69, Oct. ’70) carried the story, and he co-wrote a book, titled Dove, detailing his journey.

Before beginning his around-the-world journey, Graham had sailed alone from California to Hawaii. However, he declared the official starting point of his around-the-world journey to be Hawaii, where he and his family lived at the time. At the age of sixteen, he started out heading west in his 24-foot sloop. He was originally given two kittens for company, that he named Joliette and Suzette, and through his travels lost and gained several more, ultimately docking with Kili, Pooh, and Piglet. He married along the way and, after almost five years, ended his journey in Los Angeles instead of finishing his around-the-world journey where he started in Hawaii. He and his wife, Patti Ratterree, briefly attended Stanford University, then settled in Montana.